Have you ever heard a combination of words, and thought, that would make a good name for a book, or a film, or maybe a band? Back in the eighties, this thought must have gone through the mind of Peter Webb, my late husband, as this is what he called our band.

At the time, and over the years, I have often secretly thought it was a rather unusual choice for a band name. Maybe it’s the reason why we didn’t become famous, or maybe that was because we were ahead of our time. (Allow me a bit of delusional thinking!)

In recent days, or years, I have rethought my response to the name. When I originally asked Peter what it meant, he would say, it’s an economic term. And I would nod, knowingly, not understanding at all. In case it’s new to you, here is the definition:

The variable in an experiment that has the potential to negatively impact the relationship between the independent and dependent variables. “The issue of uncontrolled variables often occurs in relation to problems with correlation and causation. This, therefore that, is not always true. 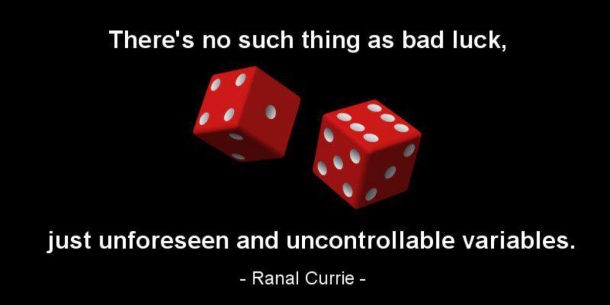 I’m not sure how Peter would feel about me transposing the name of his band over to the current discussion of climate change and what we oughta do. I hope he is smiling. The band name lives on!

I’m guessing it doesn’t take much thought to realise how I have linked climate change and ‘the uncontrollable variables’.

I’ve been thinking a great deal about what to write after my last blog, 7 months ago.

Since then, we have attended two of the marches organised by the School Strike for Climate group, in March and September. A lot has happened since the original strike in November last year. The numbers of people attending has grown exponentially. 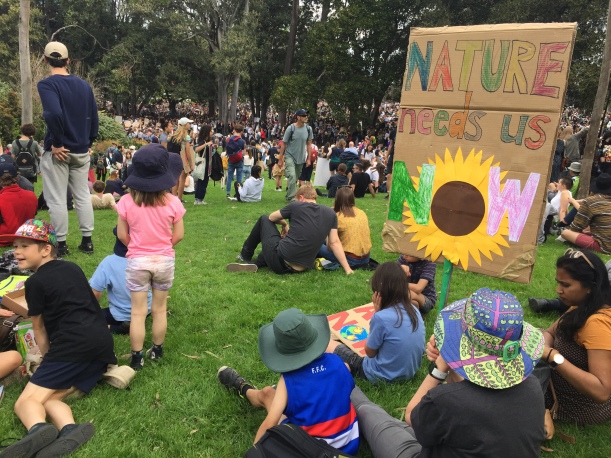 Sitting on the verge in Treasury Gardens, on the 20th of September, amongst the tens of thousands of people who came together to show their support for the students, one can’t help but be moved.

Extinction Rebellion, which only formed at the end of October last year, has grown to be a worldwide movement in less than a year.

Greta Thunberg has become, even more so, the voice of a generation. (She now has 7.3 million followers on Instagram.)

And Ruth Williams? I have pulled back from social media, even though that is the stage on which we are encouraged to perform.

The photo of The Uncontrollable Variables taken at the Clifton Hill Organ Factory in the early eighties, is the only photo we have of the members of the band.

In recent times, I feel that my life is being stolen from me. I’m not sure if it’s big data or the seemingly constant expectation to share one’s life, or an existential fear of whether we can create a future that will rectify Greta’s assertion that:

The eyes of all future generations are upon you. And if you choose to fail us, I say: we will never forgive you. 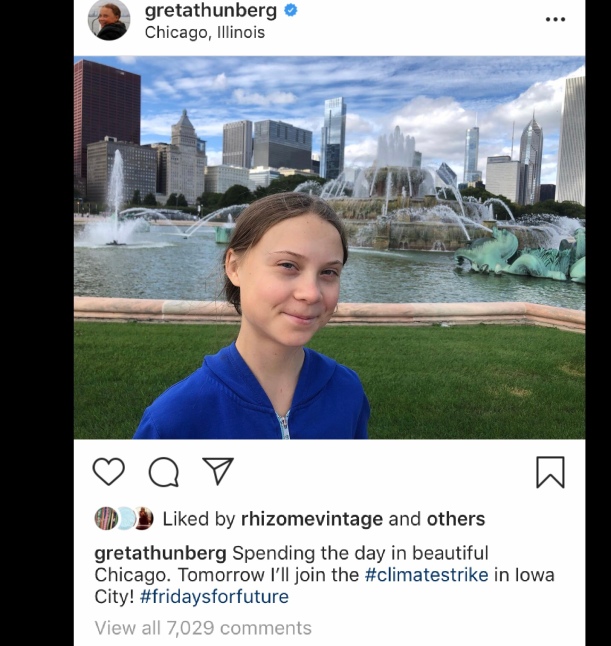 I was going to use one of the images of ‘angry Greta’ from her speech at the UN Climate Action however, this is the latest photo she has shared of herself so I have gone with this one.

I’m not ready to join Extinction Rebellion but I am ready to rebel.

My current gospel is ‘Climate: A New Story‘ by Charles Eisenstein. He says many things that are worthy of being included here but it’s probably better if you read the book yourself.

One of the things he says rang true with me even more so today than it had previously:

“If everyone focused their love, care, and commitment on protecting and regenerating their local places, while respecting the local places of others, then a side effect would be the resolution of the climate crisis. If we strove to heal and protect every estuary, every forest, every wetlands, every piece of damaged land, every coral reef, every lake and every mountain, not only would most drilling, fracking, and pipelining have to stop, but the biosphere would become far more resilient too.” 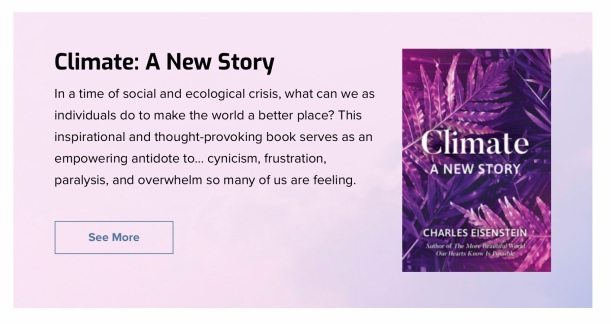 It really does serve as an empowering antidote!

Why today? I went further north, upstream, with Graeme Hamilton, from Darebin Creek Management Committee, as my guide. He showed me river red gums that are between four and eight hundred years old. We visited sections of Darebin Creek that are so unique and so much in need of our love, care and commitment.

My heart was broken and opened at the same time. 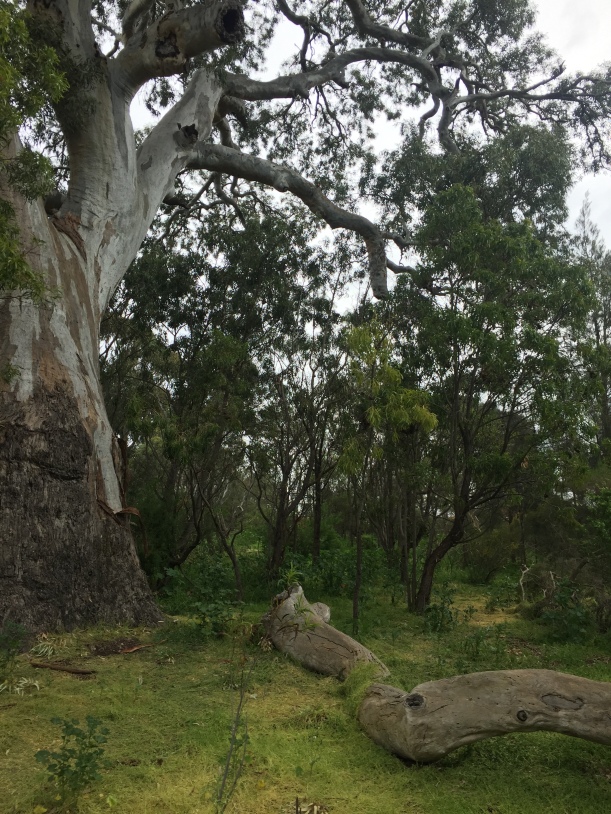 This river red gum lives in Parkhill Crescent Reserve, Millpark. It has been tested as being 800 years old. It is one of the lucky ones that has managed to survive the spread of the housing estates.

And being an Uncontrollable Variable seems to take on more urgency.

Dr Samuel Alexander in his paper, The Rebellion Hypothesis: Crisis, Inaction and the Question of Civil Disobedience’ states:

As the broad ecological crisis intensifies, and collapse situations become more common, challenging and disruptive, I have argued that more and more people will face psychological tipping points and become engaged in collective action. At some point, tolerance of ecocide will become intolerable.” 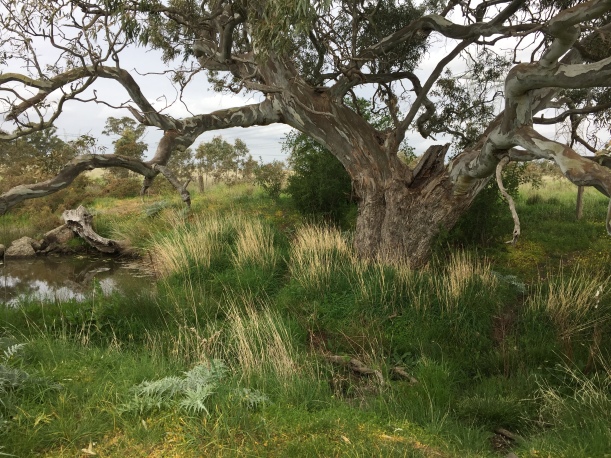 Some ecocide happening in our backyard. Artichoke thistle is spreading silently along and around the creek. A new housing estate will follow soon.

While Extinction Rebellion stage their events around attracting the attention of the media, you will find me down at the creek. There might not even be one photo taken.

Don’t get me wrong, I encourage their rebellion, and admire their willingness to be arrested and go to jail. Rebel for life! They, and we, are the uncontrollable variables. 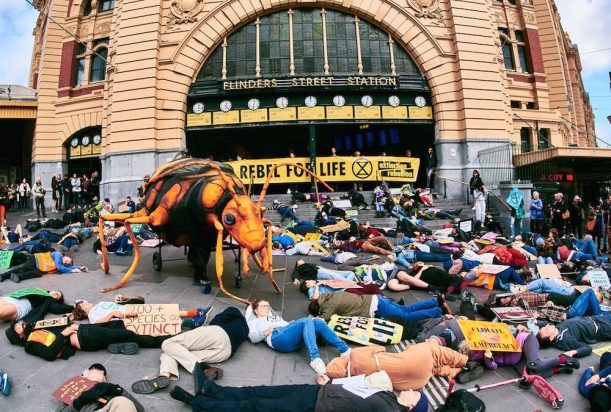