Many years ago my brother Rod gave me a CERES worm farm for Christmas; a very generous present. (Thanks Rod!)

With the worm farm installed in our backyard, I would no longer need to toss our food scraps into the bin. Yay for me! Okay, I was a little smug about how virtuous I now would be. Take that landfill!

That’s when I discovered that being the owner of a worm farm is not as easy as it sounds. Worms need food. And they die, in the heat, by the thousands! Too much responsibility!!

After that hot summer, back in 2009, when our first family of worms frizzled and fried, tossing food scraps and leftovers in the bin didn’t seem so bad after all. Until I enrolled in that damn sustainability course. That’s when the ghost of worms past started haunting me. ‘Did we die for nought?’. 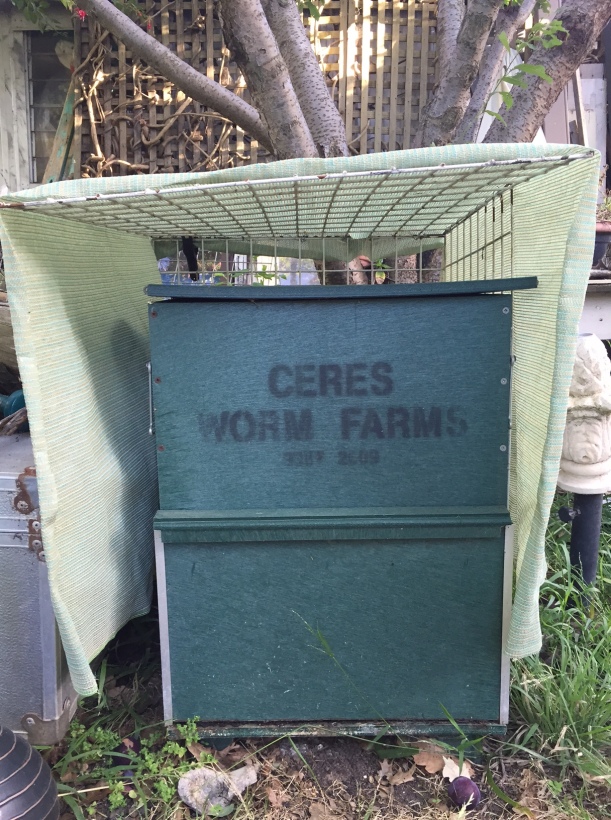 Peter fashioned this shade tent to protect the new batch of worms from certain death. They are very grateful.

Less than eight weeks into the Swinburne course, Peter and I went to CERES and purchased a box of worms. I was ready and willing to try again. Avoiding the heat wasn’t the only change we needed to initiate, there was the problem of the food not breaking down fast enough. The very helpful nursery attendant at CERES mentioned that it helps to cut the food into small pieces as it is easier for the worms to break it down. Why didn’t I think of that? Worms have very tiny mouths! 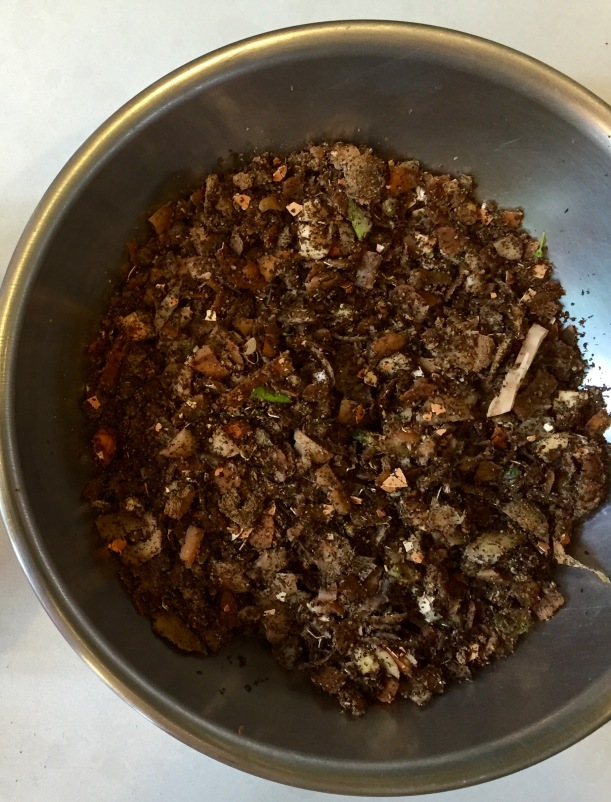 Yummy worm food – a selection of carrot and potato peelings, some egg shells and loose tea.

One day, while peering at the worms, it occurred to me that I am a farmer, a worm farmer. I have a responsibility for the worms. It is a symbiotic relationship. I need the worms to dispose of our food scraps and they need me to make sure their conditions are met – they need food, and shelter from the elements.

I’ve learnt a lot about myself from the worms. How fear of failure can paralyse even the best of intentions. Every time I open the lid to spread a new batch of food, I still get that tight feeling in my stomach. Will they still be alive? So far, they have survived, and I breathe a sigh of relief. I love worms.