Back to the classroom. One of our set texts was ‘The Conundrum’ by David Owen. The extended title was ‘how scientific innovation, increased efficiency, and good intentions can make our energy and climate problems worse’. It didn’t sound like it would be relaxing bedtime reading however I persevered.

In the introduction, Owens tells a story of arriving in Melbourne for a conference. He was telling someone in the audience about his theme for the presentation, when the guy interrupted, saying, “Just tell me what to buy!”

I know that feeling. If the lifestyle we are currently living is not sustainable, then just tell me what I need to do to reduce that old ecological footprint of mine!!

Anthony James, our lecturer, had a multiple choice ‘sustainability quiz’ that we hoped might provide us with ‘the answer’.

He set up three cups and we had to say which cup we thought was the most sustainable option. We were presented with a plastic cup, a paper cup and a china mug. I have added a fourth cup, just to make this a bit more interesting: the KeepCup.

This is an abridged version of the class discussion, which, not surprisingly, went on for a rather lengthy period. 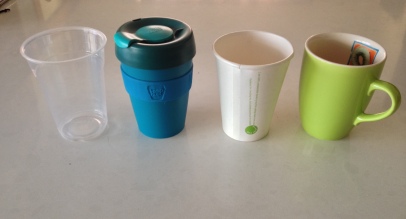 You also won’t be surprised to discover that each option has its pros and cons.

The china cup, made in England, will last longer than the other alternatives but of course there are issues such as the need for frequent washing, transporting it from one side of the planet to the other and, besides, your favourite barista would probably not welcome you bringing your own mug from home.

Plastic, while often recyclable, uses up valuable oil and gas resources in the manufacturing process. (The original cup was a Styrofoam cup – they are so much out of favour that I couldn’t find one for the photo shoot. They have a very bad reputation!)

This paper cup is 100% compostable. (Produced locally in Melbourne by Planet Cup) This is a good option however it still means that the paper has to come from somewhere and energy will be tied up in producing them.

The KeepCup, created by Abigail Forsyth, also from Melbourne, has been so successful that it is now sold in 32 countries. Based on the idea of Forsyth’s daughter’s juice cup, it has clearly caught the imagination of millions of people around the world. And here lies the problem. We can’t stop buying them. In an article from The Age in 2013, when the company were asked to create yet another version, Forsyth responded on their blog,”we are trying to create fewer cups, not more…” In that same article we learn that “since 2009 we have bought 3.5 million cups”.

Owen asserts that ‘we’re consumers at heart’, and, in my experience, this rings true. I bought a KeepCup but I still haven’t used it – I don’t actually buy takeaway coffee very often – but I just like having one.

At the end of our session, Anthony declared that trying to work out which is the most sustainable cup is almost an unanswerable question and an analogy for sustainability overall.

He wanted us to consider these questions before our next class:

Why have we assumed that something is so necessary?

What do we actually need?

This last question is my favourite – what do we actually need.

Have you ever completed one of those on-line quizzes where you can find out your ecological footprint?

Are you now asking yourself, what the hell is an ecological footprint?

The WWF defines it as ‘the measure of the impact humans have on their environment’. Here in Australia, it is noted that “we are consuming more than three times our fair share of the planet’s resources.”

Let’s just sit with that for a while.

In our second workshop for the Swinburne course we were asked to take the quiz on the WWF website and share our results with the class. This is not the kind of information that I felt comfortable sharing, especially in a classroom full of people who were obviously into living sustainably. (Why else would they be doing this course?) I just hoped I didn’t have to go first.

Fortunately I hadn’t taken the seat at the end of the row and even more fortunately, my result, thought not as ‘good’ as some, was ‘better’ than others. (Since when did such a thing become a competition!) 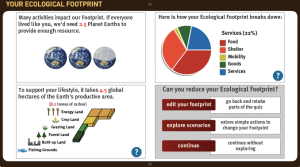 Pretty much everyone in the class was surprised by their results; even for members of the class who were vegan and only rode bicycles etc. It didn’t seem that anyone was living within the limits of the planet. One of the complicating factors in Victoria is that our electricity is created from burning coal, which means the majority of us will automatically have a bigger footprint.

Your homework for this week is to check out your own ecological footprint. I have chosen the WWF version because it is user-friendly and even a little entertaining.

There are those who don’t think much of the whole idea and others who think there are better methods. You are encouraged to ignore such folks, just for the purpose of this exercise.

Feel free to share your results with us. Or keep it to yourself. You might be relieved or shocked. You might wish you’d never done it or feel pleased to have somewhere from which to begin to make changes.

One step at a time.

A year ago I enrolled in the Vocational Graduate Certificate of Sustainability at Swinburne University. This was not part of my twenty year plan. Not that I have one, but if I did, it would not involve going back to study and especially not studying something as seemingly ‘dry’ as sustainability.

Initially I had a long list of reasons for not being able to do the course: it would cost too much, I don’t have enough time etc. The universe was one step ahead – somehow each of my concerns were addressed. Not only was the course subsidised by the government, for the most part it was delivered on-line and, the contact days were on Tuesdays, meaning it did not cut into our trips to the farm. So I signed up.

I now feel incredibly fortunate for having been given the opportunity to do this course. I have learnt so much about what it means to live sustainably. One of the first things I learnt was that it is not just about buying more efficient light globes and installing insulation. The other thing I have learnt is that every little change we make matters. At first glance, these two lessons may seem contradictory. I soon came to the conclusion that it has a lot to do with living consciously and to acknowledge the way that everything is connected.

For the last twelve months I have been looking at where I can make changes towards living a more sustainable life. It has not been easy. I was not prepared for the ability of my mind to resist change. Any change – big or small.

For the next twelve months I would like to share with you my wins and my losses in this ‘journey’.

A stitch in time saves nine and a change in time?

Who knows what could be saved, it’s worth taking that first step.