Much has already been written about the new spring lamb campaign from Meat and Livestock Australia, an advertisement encouraging Australians to embrace diversity. Not surprisingly, it has managed to divide opinion along opposing sides. 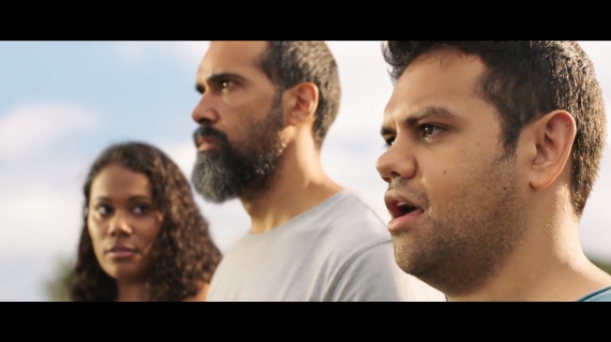 The criticisms range from Pauline Hanson, who accused the ad of bowing to the demands of political correctness, through to Luke Pearson, an indigenous reporter for NITV, who saw it as being ‘rife with cultural stereotypes’. (Tv trivia: Meyne Wyatt, the actor on the right of the screen, was the first aboriginal actor to have a main role on Neighbours, after the show has been showing on television for 29 years!)

This post is actually about food. The lamb commercial just happened to provide a point of entry to a conversation about identifying an Australian cuisine. My interest in this area was piqued after reading John Newton’s book, The Oldest Foods on Earth: A History of Australian Native Foods.

Encouraged by our son Louis’ recommendation, we read Dark Emu, by Bruce Pascoe. I was after something to follow on and the above book showed up as ‘people who read Dark Emu also read this book’. So I gave it a go. Reading it has resulted in a whole new way of viewing native foods and the value they offer to our national cuisine.

While reading Dark Emu, I learnt about the damage that was caused by sheep when they first arrived on our shores. (I don’t blame the sheep, it’s the folks who brought them here that are the real perpetrators. Bad folks!)  Pascoe brings Eric Rolls’ book, A Million Acres, to our attention. “The lush yam pastures of Victoria disappeared as soon as sheep grazed upon them as the dentition of sheep allowed them to eat growth right to the ground, destroying the basal leaves.” Murnong, a perennial herb with edible tuberous roots, was one of the staples of the aboriginal diet and without this regular supply of food, the aboriginal people had to find new sources of sustenance. 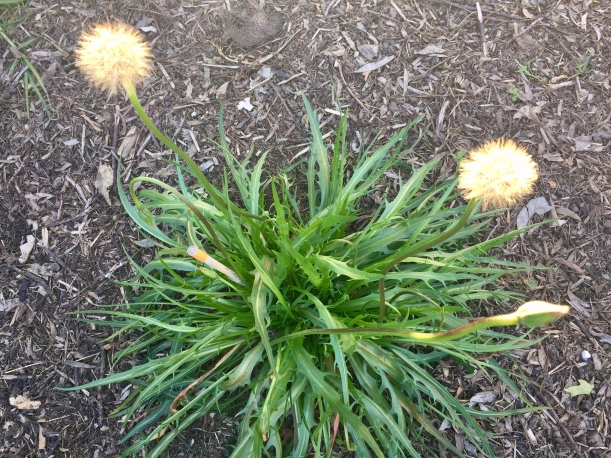 This fine example of microseris lanceolata (murnong) is growing in our backyard. Louis bought them from the St.Kilda Indigenous Nursery Co-op back in July 2016. They seem to like the soil in Reservoir.

In the opening pages of The Oldest Foods on Earth, Newton does not hold back in letting us know how he sees our history with Native foods: “In more than 200 years of occupation of this continent, European Australians have turned their backs on the vast majority of foods the Indigenous people have been eating for 50 000 years; ignored their sage and intricate management of the environment and its abundant foods…”

Things are slowly changing, the influence of books such as Pascoe’s book, Newton’s book and Bill Gammage’s The Biggest Estate on Earth seem to have caused a tipping point, inspiring multitudes of Australians to question their beliefs about how aboriginal people managed the land, and the wide choice of plants and animals that were part of their diet.

Bruce Pascoe launched a pozible crowd funding campaign in 2015, raising $32,874 to support “Gurandgi Munjie, a group of Aboriginal men and women determined to recover the traditional food plants of their culture. The company has begun growing yams, grains, vegetables, fruits and herbs on several south coast NSW properties. We have growing trials at Berry and Brogo on the south coast of NSW and Genoa and Mallacoota on the far east of Gippsland.”

A photo from the pozible campaign page, showing Bruce Pascoe with the murnong seedlings, as a very attentive canine looks on.

We have our own little project about to start up at our farm in South Gippsland. Louis and his friend, Julian Brown, have plans to set up a site where they will research the effect of using fire to encourage the growth of native plants such as murnong, chocolate lily and Kangaroo grass. They have plans to sell the produce at a local store and donate the funds to Bruce Pascoe’s project in Mallacoota.

Louis and Julian walk the paddocks looking for a suitable site for their research project. In Newton’s book, he tells us of his meeting with Merridoo Walbidi, at Bidyadanga in WA. Newton goes onto say that, once when Merridoo was interviewed regarding how modern culture and traditional culture could co-exist, he had replied, ‘we must walk together’.

Newton made ‘a proposal’ in the final pages of his book: “Australia Day on 26 January celebrates the day Captain Phillip raised the flag at Sydney Cove. It continues to be a contentious day; some even call it Invasion Day. I would like to suggest that we celebrate the day, in our cities and towns, with a meal of native Australian foods shared between European and Aboriginal Australians. To take up Pascoe’s suggestion, the meal would be giving thanks to the Indigenous inhabitants for caring for the country, and – admittedly belatedly – showing us the foods of the land.’

I like this idea. Encouraging ‘Australians’ to eat lamb, somehow seems insulting, considering the role grazing sheep played in changing the face of the land. If you have been at all interested in this post, I highly recommend reading ‘The Oldest foods on Earth’. It is a revelation.

These sheep have clearly heard of our plans to grow murnong and are rushing down to the back paddock to stake their claim. I don’t think they are going to like the boundary fence, designed to keep them from using their devilish dentition to munch those basal leaves!