There appears to be two main schools of thought on what to do with dandelions – spend your entire life trying to remove them from your lawn and garden, or appreciate their nutritional and medicinal value by including them in your diet. I have been in the former camp for pretty much all of my gardening life however in recent years I have gained an interest in learning about these plants we call weeds. Most recently I bought a book to help me in my quest: 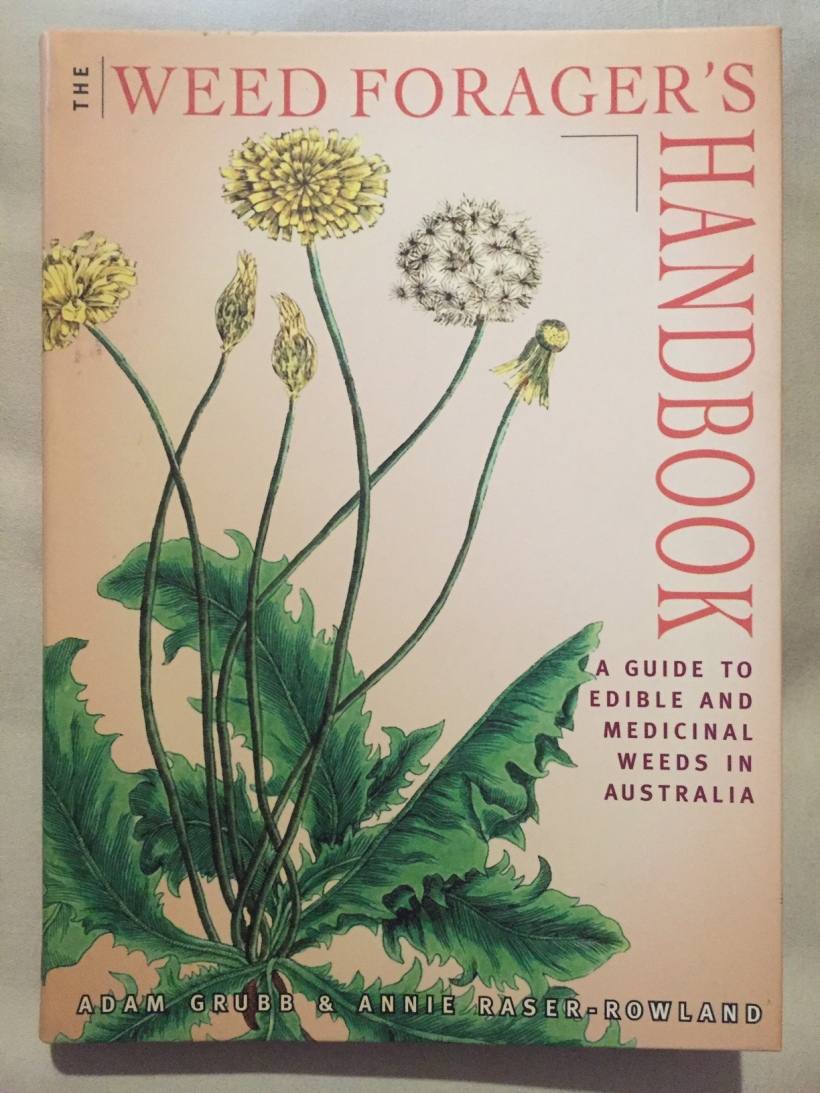 Kelly, one of the other participants in the Community Leadership in Sustainability (CLS) program, brought them along to sell. I purchased 2 copies – one for us and one for our son, Louis.

It sat on the pile of books next to our bed for a few weeks, and was then overtaken by other newer, supposedly more interesting books, until it was relegated to the book shelf in the guest room.

Don’t despair, my foraging friends, Facebook came to the rescue! One of my favourite Facebook groups is called ‘Edible weeds and other useful survival information’. Yesterday after I finished watering the garden and pulling out a few weeds (heretic!) I thought I’d see what the FB world is sharing. That’s when I saw this post:

I was horrified – they looked exactly like the ones I had just removed from our side path!

I can’t show you a ‘before’ because I was in the mindset of, ‘better remove those weeds from the side path’ and didn’t think to take a photo – why would you?

It wasn’t too late to save the recently removed weeds from the compost.

I feel guilty just looking at this photo, to think I was going to leave them to die in the 40 degree heat! I’d like to think they would prefer their qualities were used more purposefully.

I followed the recipe provided and was pretty happy with the result. I was due to attend a Banyule CLS group that evening. Now if I wanted the perfect group of people that would be willing to be guinea pigs for my first efforts at preparing weeds for consumption, this would have to be it! And they did not disappoint.

There wasn’t quite enough to share between 26 people however the brave ones were happy just to have a taste and, to my delight, some were even inspired to give it a go themselves!

Ian McBurney was the guest presenter last night. He bravely took on the topic, ‘Leadership and Change in a Changing World’ and somehow managed to make it interesting and relevant and even doable. One of the things that hit me was his assertion that we are already all connected and, even if we don’t know it, we are influencing each other all of the time. I was seeing this being acted out in my relationship to dandelions. I had been influenced by Kelly’s book, and Alexander’s post and, by taking the prepared dandelions along last night, the influence is spread wider.

Changing behaviour is not easy, at least for me, even with all of the knowledge I have accumulated about why and how. Every time I do make a change, even to the smallest of my habits, I feel secretly thrilled that it is possible, and I wonder what change I will take on next, and know that there are people all over the world making changes, big and small, and it’s nice to be part of this little revolution.

I’m interested in how we live and how we die. I like to try things on and see if they work for me. I find the human experience a fascinating one. No matter how much we hear about there being evil in the world, I also know there is goodness, and many people who are dedicated to caring for everyone and everything.

2 thoughts on “The dandelion in the garden”